Why God Cares About Football

Full disclosure, I’m a Seahawks fan. I rooted for Dave Krieg and Steve Largent back in the day. I made fun of Brian Bosworth. I suffered through mediocrity until the coming of the Holmgren. I lamented the loss to the Stealers (I know what I wrote) in Super Bowl XL. I prepared myself for a time of rebuilding when my team started a rookie. I marveled when he took them to the playoffs in his first season. I was stunned beyond words when he won a Super Bowl in his second 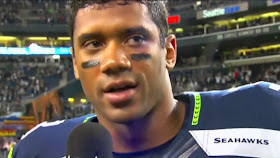 Now, in Russell Wilson’s third season as he prepares to lead the Seahawks back to his second Super Bowl, people are talking about his faith. After the ‘Hawks beat the Packers in the NFC title game Wilson spoke through tears about how God had prepared him and the team for moments just like that. A few days later the quarterback he defeated, Aaron Rodgers, said he doesn’t think God cares about the outcome of football games.

Is Wilson right? Did God prepare him for that moment? Is Rodgers right? Does God not root for any of the football teams out there?

But neither do I think that God is a football agnostic. I don’t agree with Rodgers that God doesn’t care about football (or other sports). 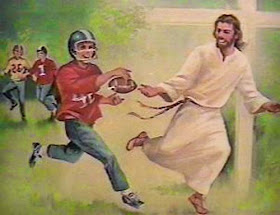 God cares about us. He wants each of us to use our unique skills, talents, experience, and opportunities to show love to our neighbors and to bring glory to God. If our job is as a plumber or a programmer or a preacher or a punter, God wants every one of us to use our job to love others and to love him. That’s the core of the Law and the Prophets (according to Jesus).

I think God cares about football in the same way he cares about every job that everyone has. He cares that we use what we’ve been given – whether little or much – to obey him and love our neighbors. As a writer and a preacher, my job is to string words together into sentences and paragraphs that convey meaning. I could use that talent to make money writing self-help books and giving motivational speeches, but instead I take a moment to pray before I pile words together. I ask that God would give me the words to speak or write for his glory. If I believe that God will give me stories and sermons so I can do my job to his glory, then I have to believe that he will give football players similar opportunities to use their jobs to bring glory to him.

I don’t think that God wants the Seahawks to win the Super Bowl more than any other team. But I do think that God can use football players for his glory, whether they win or lose. I do think that these men who have an amplified voice in the world can, through the platform of sports, make an amplified difference. Russell Wilson can help to fight childhood diseases and to encourage young people facing life-threatening illnesses. Richard Sherman can force us to have conversations about race and racial bias. Marshawn Lynch can make us all reflect on how much time we spend talking about doing our jobs rather than just being about that action (boss). And that’s just a small list of a few players on one team.


James T Wood is a writer, minister, and teacher in Portland, Oregon. He and his wife Andrea have worked with established churches and church plants all over the US. You can find out more about James and what he's up to at www.jamestwood.com.
Aussie Pete at 1:18 PM
Share